skip to main | skip to sidebar

HOW TO DRAW LIKE HOWARD PYLE, SOME THOUGHTS ON THE CREATIVE PROCESS 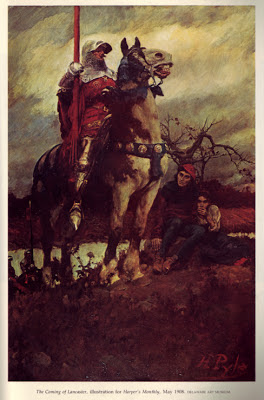 This illustration, "The Coming of Lancaster" by Howard Pyle, was a very important part of my education as an illustrator.  It taught me one of the most valuable lessons I would learn, a lesson that was key to almost everything I learned afterword.

I started my illustration education after two years in the Engineering program at Brigham Young University. I had never had any formal art education but I knew that I wanted to make pictures.

In my second year I was taking a History of Illustration class taught by Robert Barrett. I loved this class. I was inspired by all the great work but I was also a little discouraged. I began to doubt my abilities and wonder if I would ever learn how to make pictures like the ones I was seeing.

The day I saw "The Coming of Lancaster" projected on the screen I remember being especially discouraged. I saw it and thought, How can I ever learn to make a picture like that?" It just didn't seem possible to me. Thankfully, before the despair set in, Bob showed us the next slide. 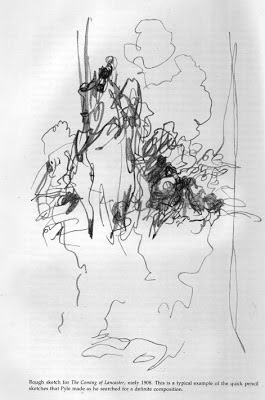 This one of Howard Pyle's early rough sketches for "The Coming of Lancaster". I saw this and thought, "THAT I CAN DO!" What an epiphany, I finally understood that great works don't begin as great works. They begin as rough ideas. I realized that creation is a process. I thought if I can understand the first step I can learn the next step. I was fully aware that I had much to learn, but I was confident that I could learn it.

Here's a rough sketch of my own. This is the sketch that later became the cover for "the Bad Beginning" 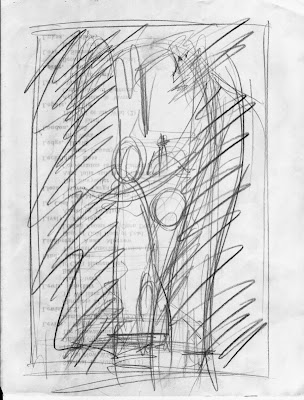 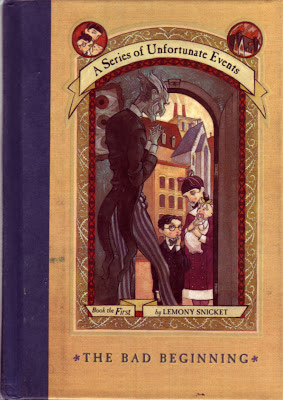 Today, I'm still learning and I still can't draw like Howard Pyle. Even after illustrating many books, whenever I start a new picture, I still get anxious and doubt my abilities. When this happens I just remember to start scribbling.
Posted by Brett Helquist at 9:54 AM